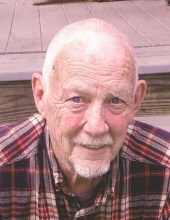 Abingdon, VA – Arnold Lawrence “Larry” Holden, age 84, passed on Sunday, March 6, 2022, at his home. Larry was born in England, raised in Canada, and eventually moved to the United States. He served in the Royal Canadian Air Force, operated Holden Printing in Los Angeles, CA before moving to Abingdon, VA in the early 90’s where he became a member of Cleveland Presbyterian Church.

Larry was preceded in death by his parents Arnold and Dorothy Ingham Holden; brother, Roderick Holden; and sisters, Alma Harrison, and Patricia Collins.

Visitation with the family will be held 1-2 p.m. Sunday, March 13, 2022, in Cleveland Presbyterian Church, 18076 Cleveland Church Road, Abingdon, VA. Funeral services will be conducted at 2:00 p.m. at the church with Rev. Rick Laney officiating. Interment will follow in the church cemetery.

To order memorial trees or send flowers to the family in memory of Arnold Lawrence "Larry" Holden, please visit our flower store.