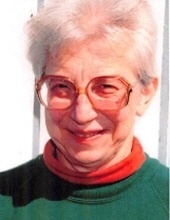 Helen J. Napps died Wednesday, March 22, 2017 at her home in Abingdon, Virginia after a prolonged illness. She was born in Mooresville, N.C. on March 24, 1934. Helen was the devoted wife of The Reverend Klell B. Napps, now deceased.

Following their relocation from North Carolina to the Abingdon area in 1970, Helen and Klell soon became noted for their involvement in local and regional organizations and services, and their love and support of community, friends and family. They both were active at Sinking Spring Presbyterian Church (SSPC) where Helen served as an Elder for many years, and was the inspiration for the formation of SSPC Preschool.

Helen and Klell shared many interests including travel, reading, music, gardening, and entertaining friends at their home on Main Street. A walk down Plumb Alley would often assure seeing one or both working in their flower garden. Their travels took them to foreign countries as well as trips to small interesting towns in Virginia and in neighboring states. However, it was their trips to Scotland that inspired their annual “Robert Burns” party where dozens of friends gathered to enjoyed memorable evenings of Scottish food, music, and conversation.

As an avid reader, Helen was a frequent patron of the Washington County Public Library. Quickly, she became an active member of the Friends of the Library and, on many occasions, hosted a luncheon or dinner for the speakers of the “Sunday with Friends” program.

Helen’s leadership skills were valued by numerous community organizations where she was tapped frequently to serve on their respective governing boards. Among them were the United Way of Washington County, the Virginia Highlands Festival, Friends of the Washington County Library, and the Steering Committee of the College for Older Adults at the SW Virginia Higher Education Center.

From 1997 to 1999, Helen was employed by the Virginia Department of Social Services SW Regional Office as a Licensing Specialist. Over the years she provided oversight on a host of policy issues that ranged from Day Care to Title XX, WIN, Housing, Volunteers, and much more. In 1991 Helen received the Commissioner’s Award for Outstanding Service to the Department. At her retirement luncheon, she was presented with a large scrapbook compiled by co-workers across southwest Virginia that captured the professional and personal impact she made in the organization. They expressed their admiration and respect by describing Helen as a person with a great zest for life, boundless energy, joyful, strong character, compassionate, and dedicated.

In 2002 the Virginia Coalition for the Prevention of Elder Abuse, Inc. created and honored her as its first recipient of the Helen J. Napps Award of Excellence in recognition of her groundbreaking work in creating state legislation for adult protective services. Since that time, the Helen J. Napps Award of Excellence has been given semi-annually to an individual who has made substantial contributions toward the prevention and support of older Virginians who are vulnerable to neglect, abuse, and exploitation.

A memorial service will be held at Sinking Spring Presbyterian Church on Saturday, April 1, 2017 at 2:00 p.m. The service will be conducted by The Reverend Joel Long. Family and friends will visit at the church following the service. In lieu of flowers, contributions may be made to Sinking Spring Presbyterian Church, 136 East Main Street, Abingdon, Virginia 24210, and to Friends of the Washington County Public Library, 205 Oak Hill Street, Abingdon, VA 24210 .

Those wishing to share memories and express sympathy online may do so by visiting www.farrisfuneralservice.com. Helen Napps and her family are in the care of Farris Funeral Service and Crematory, 427 East Main Street, Abingdon, VA 24210 (276-623-2700).
To order memorial trees or send flowers to the family in memory of Helen Jackson Napps, please visit our flower store.