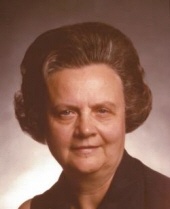 Abingdon, VA – Virginia Easter Compton Smith, who was a strong woman with a wide circle of friends and family and a dedicated teacher, church member, and a lifelong Democrat, died on Tuesday, June 17, 2014, in Abingdon, VA. She was 92. Virginia was born on Easter Sunday, April 16, 1922, in Council, Virginia, to Ivon Compton and Len Smith Compton. As a child, she attended Buchanan Mission School in Council for $1 per month. Virginia graduated with a teaching diploma from Radford State Teacher’s College in 1942 and received a B. S. degree in Education from Radford College Woman’s Division of Virginia Polytechnic Institute in 1961. As her first job, she worked for the Buchanan County Welfare Department for two years as a social worker. Thereafter, Virginia served as a school teacher for 38 years. She first taught at Back Hurricane Elementary School for $38 per month. She then taught at Council Elementary, Vansant Elementary, and Greendale Elementary, and finally retired as the pediatric teacher at Johnson Memorial Hospital. Virginia had a variety of interests, including gardening, cooking, canning, bluegrass, and traveling in the U.S. and Canada with family and friends. Virginia’s sour dough bread was her trademark. She was president of the Mattie Roundtree Women’s Club and Spring Creek Extension Homemaker’s Club in Abingdon, VA. Her passions, however, lay with her family, church, and politics. Virginia taught Sunday school nearly continuously for 62 years. She began teaching Sunday school at the age of thirteen at Corinth Baptist Church in Council. Virginia continued teaching at Vansant Baptist Church, where she and her husband, Roy A. Smith, were charter members and where she grew and arranged the offertory table flowers each Sunday for many years. In 1965, Roy and she moved from Grundy, VA to Abingdon, VA, and she began teaching the Friendship Sunday School Class at Abingdon Baptist Church, which she did for 32 years, until 1997. Virginia was also president of the Women’s Missionary Union and of the Shalom Circle, a Girls’ Auxiliary leader, and a Hearts of Gold choir member. She enjoyed hosting frequent parties and picnics for church members at her home. Virginia’s favorite Bible passage was “God is love.” That pretty well summarizes her life, too. Virginia was very active in politics throughout her life. She was president of the Buchanan County Democratic Women’s Club and a member of the Washington County Democratic Women’s Club. She sat on stage with Harry Truman when he spoke at Abingdon’s 4-H Center; attended a speech by John F. Kennedy; met Jimmy and Rosalynn Carter; and shook hands with Bill Clinton. Virginia attended the inauguration and inaugural ball of Bill Clinton and of Governors Chuck Robb, Gerald Baliles, Doug Wilder, and Mark Warner. Virginia’s husband of 53 years, Roy A. Smith, a WWII veteran and former game warden, died in 1999. She is survived by her daughter, Renna Cook and son-in-law, C. Allen Cook of Abingdon, VA; two grandsons, Lt. Col. Aaron Cook, M.D. and his wife, Marisa of Ramstein, Germany and Nathan Cook, Esq. and his wife Christine of Wilmington, DE; two great-grandchildren, Christian Cook of Ramstein, Germany and Virginia Cook of Wilmington, DE; brother, James Compton and his wife Louise of Max Meadows, VA; three nephews: Dirk Compton and his wife Katrina of Pulaski, VA; Bryant Compton of Max Meadows, VA; and Keeb Compton and his wife Kim of Abingdon, VA; three great-nephews, Conner and Cade Compton of Pulaski, VA, and James Compton of Abingdon, VA; and two great-nieces, Christina and Victoria Compton of Abingdon, VA. Friends will be received at the home of Renna and Alan Cook at any time. Visitation will be from 12:00-2:00 p.m. Saturday, June 21, 2014, at Abingdon Baptist Church. A funeral ceremony will follow at the church at 2:00 p.m. Saturday with the Reverend Alan G. Moor, the Reverend Parke L. Deans, and Richard Foil officiating. Interment will follow at Forest Hills Memory Gardens where Dirk Compton, Bryant Compton, Keeb Compton, Dwayne Cooke, Charles Grogan, and Johnny Crigger will serve as pallbearers. Honorary pallbearers will be ladies of the Friendship Sunday School Class, the Shalom Circle, and Sarah Armbrister. In memory of Virginia, memorial contributions may be made to the Abingdon Baptist Church Memorial Fund, 361 West Main Street, Abingdon, VA 24210; Vansant Baptist Church, P.O. Box 649, Vansant, VA 24656; or Corinth Baptist Church, c/o Kay Fletcher, Treasurer, 8864 Helen Henderson Highway, Honaker, VA 24260. The family would like to extend a special thanks to the employees of Grace Healthcare. Those wishing to express sympathy online may do so by visiting www.farrisfuneralservice.com and signing the online guestbook. The family of Virginia Easter Compton Smith is being cared for by Farris Funeral Service and Crematory, 427 East Main Street, Abingdon, VA 24210 (276-623-2700).
To order memorial trees or send flowers to the family in memory of Virginia Easter Compton Smith, please visit our flower store.