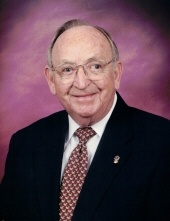 Bill Reid "B.R." Munsey, a well-known resident of Abingdon, Va., died peacefully on Friday, April 16, 2021, at his home surrounded by his family after a period of declining health.  He was born March 28, 1926, in Russell County, Va., a son of the late Isaac Ketron Munsey and Elizabeth Stinson Munsey.  He was also preceded in death by a brother, Louis Carlton "L.C." Munsey, of Claypool Hill, Va.

Bill was a veteran of the United States Air Force, an active long-time member of Abingdon Baptist Church, a long-time member and past president of the Abingdon Lions Club, and a past president of the Virginia Nursing Home Association.  Always very active in politics, he served as chairman of the Washington County Republican Party for many years and as chairman of the Electoral Board.  His many business interests in Abingdon included insurance, retail, and real estate development of both residential and business properties.  He retired as an owner and administrator of Cedar Lawn Convalescent Home.  He and Sue spent the winters at their Florida home in Haines City for 25 years after his retirement.  When in Abingdon he attended his men's coffee club at Chick-N-Little and was active in his condo association at Litchfield.  He and Sue enjoyed and supported the arts and overall culture of Abingdon.  He was well-liked and respected by his many friends, business associates, and former employees.  Above all, he was dedicated to his family to whom he was a true patriarch throughout his life.

A cryptside service will be held in the mausoleum of Knollkreg Memorial Park on Tuesday, April 20, 2021, at 2:00 p.m. with Pastor Bill Bryan officiating.  The family will receive friends from 1:00 p.m.-2:00 p.m. Tuesday at the mausoleum prior to the service.  Social distancing practices will be implemented and facemasks will be required for attendance.

The family would like to extend a special thanks to Arbi DeVault for her tireless care of Bill.In lieu of flowers, memorial contributions may be made to Abingdon Baptist Church, 361 E. Main St., Abingdon, Va. 24210.

Those wishing to express sympathy online may do so by visiting www.farrisfuneralservice.com and signing the online guestbook.  The family of Bill Reid "B.R." Munsey is being cared for by Farris Funeral Service and Crematory, 427 E. Main St., Abingdon, Va. 24210 (276-623-2700).
To order memorial trees or send flowers to the family in memory of Bill Reid "B.R." Munsey, please visit our flower store.