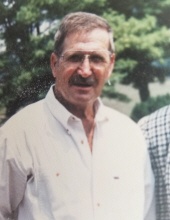 Billey Gerald "Bill" Adkins, Sr., age 86, of Abingdon, Va., went to be with the Lord on Thursday, March 25, 2021, at his home.  He was an avid outdoorsman who enjoyed hunting, fishing, and spending time with his friends in Bath County.

He was born June 12, 1934, to the late Ellis and Mildred Adkins in Dickenson County, Va. In addition to his parents, Billey was also preceded in death by his wife of 61 years, Mary Ethel Kennedy Adkins; son, Billey Gerald "Jerry" Adkins, Jr.; and three siblings, E.G., Frank, and Ray Adkins.

A graveside service will be held on Monday, March 29, 2021, at 2:00 p.m. at Temple Hill Memorial Park with Pastor Gary Harless officiating.  Matt, Canon, and Gerald Adkins as well as Vayard Harrison, Frankie Mullins, and Kenny Sauls will serve as honorary pallbearers.

In lieu of flowers, memorial contributions may be made to Jackson Memorial Church, 11313 Goose Creek Rd., Bristol, Va. 24202.

The family would like to extend a special thanks to longtime friends, Charlotte and Frankie Mullins.

Those wishing to express sympathy online or send “Hugs from Home” may do so by visiting www.farrisfuneralservice.com.  The family of Billey Gerald "Bill" Adkins, Sr. is being cared for by Farris Funeral Service and Crematory, 427 E. Main St., Abingdon, Va. 24210 (276-623-2700).
To order memorial trees or send flowers to the family in memory of Billey Gerald "Bill" Adkins, Sr., please visit our flower store.