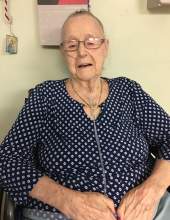 Billie Lois Kennedy, age 92, passed away on Tuesday, August 16, 2022 at Agape Rehabilitation & Nursing Center in Johnson City, TN. She was born in Steinman, VA to the late Charles H. Matherly and Florence Hill Matherly. Billie Lois enjoyed cooking and caring for her family. She was a member of the choir at Victory Baptist Church in Bristol VA.

In addition to her parents, she was preceded in death by her husband Don N. Kennedy; two sons, Douglas Mark Kennedy and Michael D. Kennedy; two brothers, James C. Matherly and Stacy Matherly.

The family will receive friends on Friday, August 19, 2022 from 5:00 p.m. -7:00 p.m. at the Main Street Chapel of Farris Funeral Service. A funeral service will follow at 7:00 p.m., officiated by Dr. Austin Cook. The burial will take place at Temple Hill Memorial Park at 11:00 a.m., Saturday, August 20, 2022, friends and family are asked to be at the cemetery by 10:45 a.m. Pallbearers will be Don Hilt, Jerry Sanslow, Johnny Sanslow, Pierre Kennedy, Mike Kennedy and Audie Kennedy.

Those wishing to share memories and express sympathy online may do so by visiting www.farrisfuneralservice.com. The family of Billie Lois Kennedy is being cared for by Farris Funeral Service and Crematory, 427 E. Main St., Abingdon, VA 24210 (276-623-2700).

To order memorial trees or send flowers to the family in memory of Billie Lois Kennedy, please visit our flower store.