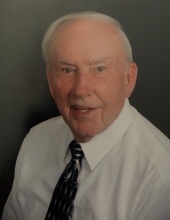 Abingdon, VA – Billy Richard Pruitt, age 87, passed on Friday, August 14, 2020, at his home.  Bill was a graduate of Damascus High School and U.S. Army Veteran.  He retired from Raytheon after 38 years of employment and was member of Abingdon Bible Church.  Bill enjoyed the outdoors, especially fishing and hunting.

He is preceded in death by his parents, Estel G. and Madie Malinda Blevins Pruitt; brothers, Herman, Raymond, and Steve Pruitt; sister, Lorraine Tuell; and mother-in-law and father-in-law, Preston and Willie DeBusk.

Funeral services will be conducted at 2:00 p.m. Tuesday, August 18, 2020, in the Forest Hills Chapel of Farris Funeral Service, 19415 Lee Highway, Abingdon, VA, with Dr. Paul Bufford and Pastors Jason Bakker and Greg Alderman officiating.  Military rites will be conducted by Highlands Veterans Honor Guard and the Virginia National Guard.  Entombment will be held in the Colonial Chapel Mausoleum of Forest Hills Memory Gardens.  There will be no visitation prior to the service.

In lieu of flowers, memorial contributions may be made to the Abingdon Bible Church Memorial Fund, 16210 Elementary Drive, Abingdon, VA 24210, or to St. Jude Children’s Research Hospital, www.stjude.org, in Mr. Pruitt’s name.

Those wishing to express sympathy online may do so by visiting www.farrisfuneralservice.com and signing the online guest register.  The family of Billy Richard Pruitt is being cared for by Farris Funeral Service & Crematory, 19415 Lee Highway, Abingdon, VA 24210, (276) 623-2700.
To order memorial trees or send flowers to the family in memory of Billy Richard Pruitt, please visit our flower store.