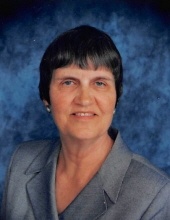 Carol Miller Graybeal became an angel of the Lord on Friday, April 16, 2021, passing peacefully at her home in Meadowview, VA. The Lord graced us with the gift of her presence for 82 years. Born in Washington County, VA, on January 19,1939, Carol was the daughter of Houston John Miller and Ruth Blair Miller (both deceased). She was also pre-deceased by an infant sister, Sammye Ruth Miller.

Carol was Valedictorian of the 1956 class of Meadowview High School. She received her B.S. in Elementary Education from Longwood College in 1960. She later received her M.S. degree in Education in 1982 from the University of Virginia at Charlottesville, VA.

Carol married William Paul (Bill) Graybeal at the Emory and Henry Memorial Chapel on June 24, 1960. As newlyweds, they lived in Chilhowie, VA, where Bill served as pastor of Mountain View, Lebanon, Seven Mile Ford and Kelly’s Chapel United Methodist churches. She happily took on the role of the pastor’s wife. They returned to Meadowview to live in 1963.

Carol was a member of Lebanon United Methodist Church, serving as a Sunday School Teacher, Vacation Bible School Teacher, Treasurer, and Secretary of the Administrative Council throughout the years. “Mrs. Graybeal” was also a well-respected educator, touching the lives of many children in the Smyth County Public Schools during her 40 years of teaching. During her teaching career, she taught both second and fourth grades at Marion Primary and Chilhowie Elementary Schools.

After her retirement from teaching, Carol served as Regent of the Black’s Fort Chapter of the Daughters of the American Revolution (NSDAR). She portrayed the role of her 6th Great Grandmother, Elizabeth Steele Moore, who travelled on horseback to King’s Mountain, SC, in 1780 to bring her husband William Moore (who had been wounded in the Battle of King’s Mountain) back home to Virginia. Carol told her 6th Great Grandmother’s story to countless tour groups and school children who visited the Abingdon Muster Grounds for quite a number of years.

She was also an active member of many other historical societies and was passionate about tracing her family’s genealogy, while helping others learn to do the same. Societies she was a member of include: The Jamestowne Society, National Society of the Colonial Dames of the 17th Century, National Society of the Colonial Daughters of the 17th Century, Daughters of the American Colonists, Descendents of Washington’s Army at Valley Forge, Descendants of the Battle of King’s Mountain, United States Daughters of 1812, United Daughter’s of the Confederacy, Women of Sons of American Revolution (WOSAR), Clan Blair Society, Retired Teachers Association of Washington County, VA, and the Antique Automobile Club of America.

The family would like to thank all their wonderful friends for the visits, phone calls, food, love and support during this difficult time.

An evening celebration of life service will be held at the Main Street Chapel of Farris Funeral Service; 427 Main Street in Abingdon, VA, on Thursday, April 22, 2021 at 6:00 PM with Reverend Paul Griffith and Pastor Donnie Bailey officiating. The family will receive friends after the service.  Burial will take place at Forest Hills Memory Gardens on Friday, April 23, 2021 at 10:30 AM.  (An arrival time of 10:15 am is requested for the burial service.)

The service will be livestreamed and can be accessed by clicking on the following link: Funeral & Cremation in Abingdon, VA | Farris Funeral Service

COVID-19 protocol will be followed which include wearing masks, social distancing and adhering to occupancy guidelines.

Mrs. Graybeal and her family are in the care of Farris Funeral Service, 427 East Main Street, Abingdon, VA 24210 (276-623-2700). Those wishing to share memories and express sympathy may do so by visiting www.farrisfuneralservice.com.
To order memorial trees or send flowers to the family in memory of Carol Miller Graybeal, please visit our flower store.