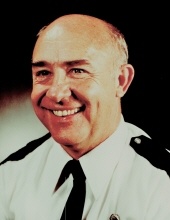 Bristol resident, Mr. Charles William “Bill” Parsons, passed away Sunday, March 22, 2020 at The Hospice House after a valiant battle with Non-Hodgins Lymphoma at the age of 86.

He was born on February 15, 1934 in Jonesville, VA. Bill graduated from Jonesville High School, class of ’51 and graduated from Hiwassee College, class of ‘53. Bill served in the United States Army as a Private First Class during the Korean War. After serving in the Army he attended East Tennessee State University. Bill was an insurance salesman for most of his life having owned and operated three insurance companies in the Tri-Cities area. He was a member of Pleasant View United Methodist Church, and served on several committees. Bill was a member of Shriners International and a member of the Masonic Order. Bill was most proud of his work with the as a lifetime member of the Bristol Life Saving Crew having served for forty years and as a founding member of the Russell County Life Saving Crew.

The family would like to extend a special thank you to the nursing staff at Bristol Regional Memorial Hospital, Ballad Health Cancer Center, and The Hospice House.

A memorial service for friends and family will be held on a future date.

During this difficult time of private services, you may show your support by joining the “Hugs from Home” program where your message will be attached to a balloon to remind the family of your love and support. Go to www.farrisfuneralservice.com or call us at 276-623-2700.  All Hugs need to be received by Wednesday at 5 p.m.

Those wishing to share memories and express sympathy online may do so by visiting www.farrisfuneralservice.com. Mr. Charles William “Bill” Parsons and his family are in the care of Farris Funeral Service and Crematory, 427 East Main Street, Abingdon, VA  24210 (276-623-2700).
To order memorial trees or send flowers to the family in memory of Charles William "Bill" Parsons, please visit our flower store.