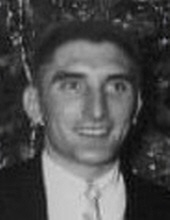 He graduated from Toronto High School in 1948 and was active duty in the US Army as a tank commander from 1951-1953 with the 14th Tank Company, 25th Infantry Division.  He was wounded in 1953 while being stationed in Korea and received his Purple Heart 63 years later.  Chester graduated from the University of Pittsburgh with a degree in Secondary Education. He taught History and Geography before moving to Texas to follow Freda Ann Dowler who later became his wife.

They had 4 children:  Paul (Karen), Mary (deceased), Beth (Jeffrey)  and Eric (Amy). Grandchildren:  Megan, Brittany, Chandler, Ashley, Dustin, Allison and Samantha. Chester was a career insurance agent until he retired in 1993.  He was active in the PCHS boosters and the Knights of Columbus. He loved hunting, fishing, golfing, wood working and collecting anything Santa Claus related.

The family would like to thank the wonderful staff at Commonwealth Senior Living in Abingdon for taking such good care of him these last 2 years and Caris Healthcare Hospice services these last few weeks.

In lieu of flowers please consider making a donation to your local dementia awareness foundation in his name.
To order memorial trees or send flowers to the family in memory of Chester Eugene Ostrowski, please visit our flower store.