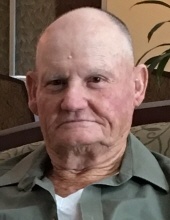 Clarence Elmer Baldwin, age 82, of Meadowview, Va., passed away on Tuesday, October 1, 2019, at his home, following a lengthy battle with pancreatic cancer.  He was born August 6, 1937, to the late James Sheffie Baldwin and Mary Ethel Childress Baldwin.  Elmer was a member of Emmanuel Baptist Church.  He enjoyed working outside and riding his John Deere tractor.

The family would like to extend a special thanks to Elmer’s caregiver, Betty Stroup, and the nurses of Hospice and Palliative Care.

Those wishing to express sympathy online may do so by visiting www.farrisfuneralservice.com and signing the online guestbook.  The family of Clarence Elmer Baldwin is being cared for by Farris Funeral Service and Crematory, 427 E. Main St., Abingdon, VA 24210 (276-623-2700).
To order memorial trees or send flowers to the family in memory of Clarence Elmer Baldwin, please visit our flower store.