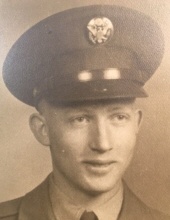 Bristol, VA - David Reece Statzer, 86, passed away Thursday, March 25, 2021 at Bristol Regional Medical Center.  David (Reece) was born August 31, 1934 to Lee Mack and Ruth (Fleenor) Statzer at his home in Bristol, Virginia, he was one of four children and attended Hamilton High School in Mendota, VA.  David (Reece) proudly served his country for six years in the U. S. Army as a demolition expert.  He was stationed at Ft. Knox Kentucky and later deployed to Germany for 15 months.

David (Reece) retired from Bristol Compressors after 25 years.  He enjoyed being at home, spending time with and spoiling his grandchildren and great grandchildren.  He was a huge fan of Hank Williams, Johnny Cash and the Carter Family.  He had the pleasure of unexpectedly meeting and shaking hands with Johnny Cash.  David (Reece) had a knack for making amazing cornbread and broccoli/cauliflower salad! He attended Willow Branch Church.

He was preceded in death by his parents, Lee and Ruth Statzer; sister, Geraldine Brummett; and brother, James N. Statzer.

Visitation with the family will be held 1-3 p.m. Sunday, March 28, 2021, in the Forest Hills Chapel of Farris Funeral Service, 19415 Lee Highway, Abingdon, VA.  Funeral services will be held at 3:00 p.m. with Pastor Michael Lyons officiating.  Interment will follow the service in Forest Hills Memory Gardens with family and friends serving as pallbearers.  Honorary pallbearers will be brothers-in-law and Bill Kaylor.  Military rites will be conducted by Highlands Veterans Honor Guard and the Virginia National Guard.

In lieu of flowers, contributions can be made to St. Jude Research Hospital at Memorial Giving, 501 St. Jude Place, Memphis, TN 38105.  The family would like to express deep appreciation to the caring and compassionate staff at Bristol Regional Medical Center.

Those wishing to share memories or messages of sympathy may do so online by visiting www.farrisfuneralservice.com. The family of David Reece Statzer is in the care of the Forest Hills Chapel of Farris Funeral Service, 19415 Lee Highway, Abingdon, VA 24210 (276-623-2700).
To order memorial trees or send flowers to the family in memory of David Reece Statzer, please visit our flower store.