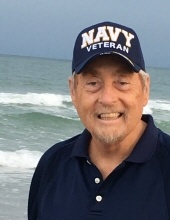 Donald Dean Frye, Sr., 74, of Abingdon, Virginia, passed away on April 23, 2022.
Don was born on November 16, 1947, in Saltville, Virginia. After graduating from R. B. Worthy High School in 1967, he enlisted in the United States Navy and served until honorably discharged.
After serving our country, he went on to have a successful career with Appalachian Power (A.E.P.); where after decades of employment retired.
Don was very engaged in the local community with his children’s activities. He thoroughly enjoyed coaching all the kids in youth baseball and football leagues. He was a proud father and even prouder grandfather.
Don and his wife Dolores enjoyed travel, community events, and spoiling grandchildren.
Don was preceded in death by his mother Norma, his father Earl, and his sister Kathy.
Don is survived by his wife of 22 years Dolores, her daughter Nicki and husband Brandon, of Wytheville, Virginia; his son Donald Jr. and wife Emily, and their sons Andrew and Thomas, of Lake Wyle, SC.; daughter Holly and husband Josh, and his grandson Tyler and granddaughter Brynn of Tega Cay, SC.
Don is also survived by his brothers, Ronald & Ann, Allen & Pat, Dennis & Sissy, Larry and Christie, and brother-in-law Bill Smith and Katherine, along with their loving families.
Don also had many special cousins, nephews and nieces and close friends that were very important in his life.
The family will receive friends on Tuesday, April 26th 2022, at 6:00 PM until 8:00 PM at Pleasant View United Methodist Church located at 18416 Lee Hwy, Abingdon, VA 24210.
The funeral service will be held on Wednesday, April 27th, 2022 at 11:00 AM at Pleasant View United Methodist Church with Rev. Barbara Farmer officiating. A graveside service will follow in the Forest Hills Memory Gardens Cemetery in Abingdon, VA with Military honors provided by the United States Navy and the Highlands Veterans Honor Guard. Pallbearers will be Tim Frye, Rodney Frye, Caleb Frye, Todd Smith, Brandon Blankenship, and Brandon McPherson.
In lieu of flowers donations may be made to: Wake Forest Baptist Hospital Cancer Center.
Those wishing to express sympathy online may do so by visiting www.farrisfuneralservice.com and signing the online guestbook.
The family of Donald Dean Frye is being cared for by Farris Funeral Service and Crematory, 427 E. Main St., Abingdon, Va. 24210 (276-623-2700).

To order memorial trees or send flowers to the family in memory of Donald Dean Frye, Sr., please visit our flower store.