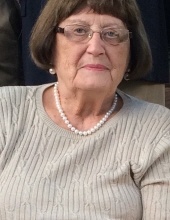 Dorothy Adele Phillips, 92 years of age, passed on Monday, March 9, 2020, at English Meadows Senior Living Community in Abingdon, Va.  Dorothy was born in 1927 on Staten Island, N.Y. to the late Frank and Irma Bloodgood Fullman. She was the sister of the late Frank Fullman Jr.

Dorothy was a woman of strong faith in the Lord. She was a longstanding member of Grand Avenue Reformed Church, Asbury Park, N.J., where she served as elder. She transferred her membership to Sinking Spring Presbyterian Church in Abingdon, Va. where she was a member of the Women’s Circle 1. She was a volunteer at the Ecumenical Faith-In-Action Food Pantry.

Dorothy was an active member in the Mattie Rountree Stevenson Women’s Club.  She also volunteered at the Barter Theatre, the Fields-Penn House and the Arts Depot in Abingdon, Va.

Before moving to Virginia in 1994, Dorothy lived many years in Asbury Park and Ocean Grove, N.J. She retired from the U.S. Army Electronics Command, Fort Monmouth, N.J., where she received numerous commendations for meritorious service.

Flowers will be accepted or donations may be made to the Cystic Fibrosis Foundation, National Multiple Sclerosis Society or the Ecumenical Faith-In-Action Food Pantry, Abingdon, Va. in Mrs. Phillips’ name.

Those wishing to express sympathy online may do so by visiting www.farrisfuneralservice.com and signing the online guest register.The family of Dorothy Phillips is being cared for by Farris Funeral Service & Crematory, 427 East Main Street, Abingdon, VA 24210, (276) 623-2700.
To order memorial trees or send flowers to the family in memory of Dorothy Adele Phillips, please visit our flower store.