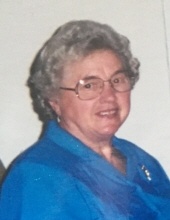 Dorothy R. Hagy, age 93, of Abingdon, Va., went to be with her Lord on Saturday, February 5, 2022, at her residence. She was born to the late David William Reed and Nellie Glenn Ramsey Reed on June 8, 1928, in the Bethel Community of Washington County. She was a 1946 graduate of Bethel High School and attended Mary Dalton Frye Secretaries School. Dorothy worked at Vance Supply in Abingdon for three years and retired from Dutt & Wagner in Abingdon after working for 20 years.

She was member of the Washington Chapel United Methodist Church since 1952, taught various Sunday School classes and was a member of the Women's Society of Christian Service serving as president for 10 years.

A special thanks to caregivers Tammy Wagner for her loving care and Joan Davenport and Charlotte Johnson.

A funeral ceremony will be held on Wednesday, February 9, 2022, at 11:00 a.m. at the Main Street Chapel of Farris Funeral Service with Pastor Larry Lusk officiating. A committal service will follow at Knollkreg Memorial Park where grandsons will serve as pallbearers. Visitation will be held on Tuesday, February 8, 2022, from 6:00 p.m.-8:00 p.m. at the funeral home.

Memorial contributions may be sent to Washington Chapel United Methodist Church, 25221 Walden Road, Abingdon, Va. 24210, in Dorothy’s honor or flowers will be accepted.

Those wishing to express sympathy online may do so by visiting www.farrisfuneralservice.com and signing the online guestbook. The family of Dorothy R. Hagy is being cared for by Farris Funeral Service and Crematory, 427 E. Main St., Abingdon, Va. 24210 (276-623-2700).
To order memorial trees or send flowers to the family in memory of Dorothy R. Hagy, please visit our flower store.