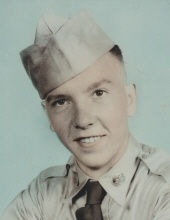 Ernest Thomas Murray, or as most people knew him, Bunch or Ernie, age 88, of Abingdon, Va., passed away on Thursday, June 23, 2022, at NHC HealthCare in Bristol, Va. He was born July 16,1933, to the late Gilmer Murray, Sr. and Oda Stuart Murray. Ernest was a veteran of the United States Army. He was also an employee of Fred Hayes Mechanical Contractors for over40 years as well as a handy man to many in the local area for most of his life. He was always ready and willing to help a friend in need and he considered everyone a friend. Unbeknownst to most, Ernest kept journals recording all his daily activities and people he met along the way. He was a poetic writer, a trait he kept hidden from the world. In addition to his parents, he was also preceded in death by his wife of 62 years, Marion Frances Murray, whom he loved more than life itself. His children never realized the depth of their love for each other until a box of handwritten love letters from the 1950s was found hidden in a back closet. They were separated for a short time during his enlistment in the army and wrote to each other daily never failing to declare their love for one another with each written word. They left a legacy of love to their children, grandchildren and great-grandchildren that will live on in their hearts forever. Their love was a true, beautiful and faithful love until the very end. On the day he lost his wife, he wrote in his journal, “Today the world ended.”
In addition to his wife, he was preceded in death by four brothers, Lester (Toon), Don, Clyde, and Gilmer Murray, Jr. (Bee), and a sister, Edith Hearl (Tence).
Survivors include his daughter, Angela (Angel) Lynn Blevins and husband Eddie; three sons, Michael Thomas Murray and wife Pam, Tracy Dean Murray and wife Kathy, and Burk John Murray and wife, Lorie; four granddaughters, Brandi Jill Gregory and husband, Steve, Kristi Jill Murray, Erin Elizabeth Powers and husband, Travis, and Andrea McKenna Murray; one grandson, Austin Tyler Riley Blevins; and eight amazing great-grandchildren with whom he loved to play in floor with well into his 80s. He is also survived by one brother, Walter Murray and wife, Shirley, and one sister, Nellie Scyphers.
Funeral services will be held on Monday, June 27, 2022, at 2:00 p.m. in the Main Street Chapel of Farris Funeral Service with the Rev. Jerry A. Eggers officiating. Visitation with the family will be held on Monday prior to the service from 12:00 p.m.-2:00 p.m. at the funeral home.
Pallbearers will include Austin Blevins, Todd Murray, Robert Murray, John Paul Murray, Travis Powers, Steven Gregory, and Travis Akers. Honorary pallbearers are Gilmer Murray, III, Richard Murray, Bobby Murray, Kim Murray, Carl Dye, and Jon Dye.
A committal service will follow in Mountain View United Methodist Church Cemetery where military honors will be provided by the Highlands Veterans Honor Guard and the Virginia Army National Guard.
The family of Ernest Thomas “Bunch-Ernie” Murray is being cared for by Farris Funeral Service and Crematory, 427 E. Main St., Abingdon, Va. 24210 (276-623-2700).

To order memorial trees or send flowers to the family in memory of Ernest Thomas Murray, please visit our flower store.