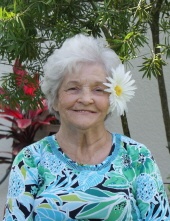 Ethel was a mother of 10 children and an accomplished homemaker who went to work as a CNA in her sixties after her children were grown. She formerly attended Souls Harbor in Rosedale, Va. and was baptized at the Old Regular Baptist Church in Harmon, Va.

A funeral ceremony will be held on  Monday, April 5, 2021 at 1:00 PM at the Main Street Chapel of Farris Funeral Service with Pastor Matthew Daniels officiating. Interment will follow at Forest Hills Memory Gardens where Anthony Dickey, Dickie Crabtree, Troy Johnson, Michael Willis, Mark Endicott, Matt Willis, Jason Ward, Jonathan Dickey, Brian Marrs, and Rickie Dickey will serve as pallbearers. Travis Ward will serve as an honorary bearer. Visitation will be on Monday, April 5, 2021 from noon - 1:00 PM at the funeral home. Flowers will be accepted.

The family of Ethel Dickey is being cared for by Farris Funeral Service & Crematory, 427 E. Main St., Abingdon, VA 24210 (276-623-2700).
To order memorial trees or send flowers to the family in memory of Ethel Dickey, please visit our flower store.