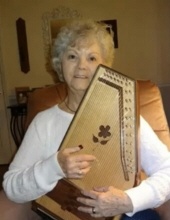 
Faye R. Warren, age 83, of Bristol, Va., went to be with her Lord and Savior, Jesus Christ, on Friday, July 8, 2022, at Bristol Regional Medical Center. She was born to Henry Crayton Ridings and Bessie Waunita Ridings on March 4, 1939, in Marietta, Ga. Faye was a devoted Christian of the Baptist faith. She was a gifted musician who played the fiddle and autoharp and was an accomplished clogger and clogging teacher. She taught countless numbers of students to clog over the years. Faye was inducted into America’s Clogging Hall of Fame in 2001.

In lieu of flowers, memorial contributions may be made to St. Jude Children's Research Hospital, 501 St. Jude Place
Memphis, Tenn. 38105.

To order memorial trees or send flowers to the family in memory of Faye R. Warren, please visit our flower store.