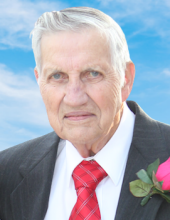 Dewey Singleton, age 92, went to be with his Lord and Savior on May 15, 2021.  Dewey was born on November 30, 1928, in Raven, Virginia.  He was the son of the late “Floyd” Dewey Singleton, Sr. and Mada Breeding Singleton. He was preceded in death by his loving and devoted wife of 59 years, Margaret Shepherd Singleton.  He was of the Old Primitive Baptist Faith.

Dewey was born in Tazewell County and later moved into the areas of Russell, Scott and Dickenson Counties.  He and his wife made their permanent move to Abingdon, Virginia with their children in 1969.  Dewey spent the majority of his career in the automotive parts business, beginning in 1955 as the owner and operator of both Clintwood and Haysi Auto Parts stores.  In 1968, he expanded his business into the area of Abingdon, with future expansions into Lebanon, Marion and Bristol.  In 1974, he extended his auto parts businesses to include service centers.

Dewey spent a lifetime taking care of his parents, children and helping many of his relatives in need. He was a loving and caring father to his daughters and sons.  He took great pride in sharing his life experiences that were filled with great successes, as well as failures, to his children. He was a loving “Pap” to his grandchildren and great-grandchildren.  In his heart, his family was his greatest joy in life.

The family would like to express a special thanks to Dr. Simon Pennings for his compassionate and dedicated care to their Daddy. Those wishing to express sympathy online may do so by visiting www.farrisfuneralservice.com and signing the online guestbook.
To order memorial trees or send flowers to the family in memory of Floyd "Dewey" Singleton, Jr., please visit our flower store.