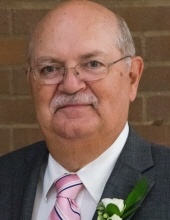 Abingdon, VA - George Andrew Owens, Jr. quietly and peacefully went home to be with the Lord on Friday, October 8, 2021 at his home in Abingdon, VA after battling cancer for the past 2 years.  George was born in Richlands, VA in 1948 and dedicated his life to serving others.  He was elected President of his senior class and graduated from Logan High School, Logan, WV. Shortly after, George enlisted into the Air Force in 1968, where he served in Vietnam and was awarded the Distinguished Flying Cross and Air Medal for heroism and meritorious achievement while participating in aerial operations.

Upon his honorable discharge from the Air Force in 1971, George returned to West Virginia, graduated from West Virginia University and began his lifelong pursuit of instilling a culture of safety, leadership and teamwork in the coal mining industry. This culminated in his position as the Vice President of Human Resources for Alpha Natural Resources where he was instrumental in leading the organization to a Fortune 500 company.

Those that knew George well, knows he had a passion for the outdoors and especially fishing. In fact, his best friend, Doug Harris, often referred to him as the “fish whisperer” due to his ability to always catch fish in even the toughest conditions.

This passion for serving others and fishing were harmoniously combined when he helped develop and nurture the Southwest Virginia Project Healing Waters, an organization that assists veterans through physical and emotional rehabilitation through the sport of fly fishing.  George was also a member of V.F.W. Post 1994 and assisted with the Southwest Virginia United Way after his retirement.
He had a positive impact on all those who were fortunate enough to cross his path, but of all those he was able to touch, his proudest achievement was his family who provided tremendous strength, support and love along a journey that was cut too short.

He is survived by his loving wife of 52 years, Debbie Small Owens; his daughter, Linzy; and sons, Trey Owens and Chaz Owens and wife Julie; proud grandfather of Eliza Owens; brother of Tim Owens and the late Ruthie Elzey; son to the late George Andrew Owens, Sr. and Geraldine “Gerry” Bohon Owens; and further survived by nieces, nephews, and other relatives and friends.

In lieu of flowers, memorial contributions may be made to the Southwest Virginia Project Healing Waters, P.O. Box 695, LaPlanta, MD, 20646. Those wishing to express sympathy online may do so by visiting www.farrisfuneralservice.com and signing the online guest register.