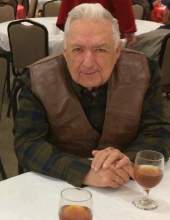 After retiring from the Military, he lived in the state of Massachusetts where his children reside for a short time. He then moved to New Hampshire for approximately 20 years before returning to Virginia, residing in Abingdon. He was a member of V.F.W. Post 1994 and enjoyed the Abingdon Senior Center. Mr. Phipps was a pilot, scuba diver, and was certified in American Sign Language.

He was predeceased by the mother of his children and former wife, Maureen Phipps (Vaillancourt); his parents; and nine siblings.

Visitation will be Saturday, May 28, 2022 from 5-7p.m. in the Main Street Chapel of Farris Funeral Service. Interment with full military honors provided by the United States Air Force will be held on Wednesday, June 8, 2022, in Massachusetts Veterans National Cemetery in Bourne, Massachusetts.

To order memorial trees or send flowers to the family in memory of George M. Phipps, please visit our flower store.