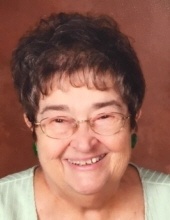 Geraldine “Jerry” Faye Jackson Dado, age 81, passed away peacefully on Wednesday, January 15, 2020, surrounded by family members in prayer.  Jerry was born and raised in West Virginia to the late John Robert and Thelma Angove Jackson.  She was a graduate of North Fork – Elkhorn High School in North Fork, W.Va. and McClains’s Business College in Bluefield, W.Va.

Jerry and her family lived most of her life in the coal fields of W.Va. They lived early on in Abingdon and then moved back in 1987. She was a member of Beta Sigma Phi sorority and an active member of Christ the King Catholic Church.

Jerry was a dedicated wife and mother. She cherished her family and every moment with them. If a need arose at her church or in the community, she was eager to volunteer. She had a vibrant personality and made friends wherever she went.

Jerry loved life. She always made anyone she was around feel happy and loved. Whether it was by sitting around the kitchen table visiting, singing and playing piano or ukele, her life was a living example of her faith and love in Christ.

The Dado family would like to thank Home Instead Senior Care of Abingdon,  MSA Hospice and Grace Healthcare for their compassion and support during Jerry’s illness.

Those wishing to express sympathy online may do so by visiting www.farrisfuneralservice.com and signing the online guest register. The family of Geraldine “Jerry” Jackson Dado is being cared for by Farris Funeral Service & Crematory, 427 East Main Street, Abingdon, VA 24210, (276) 623-2700.
To order memorial trees or send flowers to the family in memory of Geraldine "Jerry" Dado, please visit our flower store.