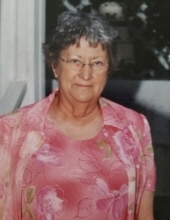 Hazel Louise Puckett Cacy, age 78, of Meadowview, Va., went to be with the Lord on Thursday, August 6, 2020, at her home.  She was born to the late Harmon Puckett and Mary Galliher Puckett in Saltville, Va.  She was a member of the Glade Spring Church of God of Prophesy.

A funeral ceremony will be held on Sunday, August 9, 2020, at 3:00 p.m. at the Main Street Chapel of Farris Funeral Service with Pastor Danny Mefford officiating.  Interment will follow in Forest Hills Memory Gardens where Brad Rhoton, Casey Rhoton, and Phil Rhoton will serve as pallbearers.  Brayden Henderson will serve as an honorary pallbearer.  Visitation will be held on Sunday from 1:00 p.m.-3:00 p.m. prior to the service at the funeral home.

Those wishing to express sympathy online or send “Hugs from Home” may do so by visiting www.farrisfuneralservice.com.
To order memorial trees or send flowers to the family in memory of Hazel Louise Cacy, please visit our flower store.