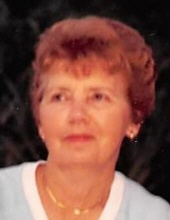 Irene Humphrey Wallace, age 97, passed on Thursday, September 19, 2019, at her home.  Mrs. Wallace was born in Washington County, Va. but lived most of her life in Chicago, Ill. before returning in 1985.

Funeral services will be held at 2:00 p.m. Sunday, September 22, 2019, in the Main Street Chapel of Farris Funeral Service with Pastor Jeff Wallace officiating.  Interment will follow in Forest Hills Memory Gardens with family and friends serving as pallbearers.  Visitation with the family will be held one hour prior to the service.

Those wishing to express sympathy online may do so by visiting www.farrisfuneralservice.com and signing the online guest register. The family of Irene Humphrey Wallace is being cared for by Farris Funeral Service & Crematory, 427 East Main Street, Abingdon, VA 24210, (276) 623-2700.
To order memorial trees or send flowers to the family in memory of Irene Humphrey Wallace, please visit our flower store.