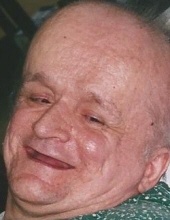 Jack “Jackie” Edgar Damron, age 73, passed away on Tuesday September 13, 2022 at Grace Healthcare in Abingdon where he had been a resident for the past 10 years. Jackie was born in Richlands, Va. and resided there until about 10 years ago when he moved to Abingdon. Despite many physical challenges, Jackie lived a full and robust life. He collected knives and action figures and enjoyed playing dominos. Jackie watched a lot of television and learned much from the shows that he watched. He was a jokester and was very talkative. He loved the nurses who cared for him. Jackie will be remembered for being a kind and sweet person, who always put his concern for others above his own.

He was predeceased by his parents Jack and Edna Arnett Damron and his sister Margaret Damron.

Jackie is survived by his brother Robert Damron and his wife Tena of Abingdon.

Services for Jackie will be private.

The family of Jack “Jackie” Edgar Damron is being cared for by Farris Funeral Service and Crematory, 427 E. Main Street, Abingdon, Va. 24210, (276-623-2700). Those wishing to express sympathy online may do so by visiting farrisfuneralservice.com and signing the online guest register.

To order memorial trees or send flowers to the family in memory of Jack Edgar Damron, please visit our flower store.