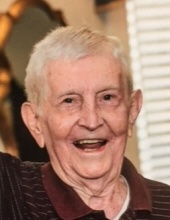 Abingdon, VA – Jack Milton Booher, age 96, passed on Thursday, March 24, 2022, in Johnston Memorial Hospital. Jack was born on Boozy Creek in Scott County, VA on July 13, 1925, to Mary Clemence Cox Booher and John Jackson Booher. He was a 1942 Graduate of Hiltons High School. Jack entered the U.S. Army Air Corps in 1943 and served as a B17 Flying Fortress waist gunner during WWII. After surviving 25 missions over Nazi Germany, he was discharged in 1945.

In 1947 Jack became a member of the Virginia State Police and served over 36 years. He served in the Covington, Danville, Richmond, Richlands, Abingdon, and Chesapeake areas. He was a member of Pleasant View United Methodist Church and V.F.W. Post 1994.

Jack was married to the late Helen Louise Phillips Booher and was the father of Anita Carol Booher and Karen Leigh Booher, both of St. Petersburg, FL.

He is survived by his daughters; sister, Mary Margaret Hensley of Galax, VA; and a number of nieces and nephews. Jack was also preceded in death by three siblings, Avanelle Worley, Evelyn Carter, and Robert Burke Booher.

In lieu of flowers, memorial contributions may be made to Pleasant View United Methodist Church Shelter Fund, 18416 Lee Highway, Abingdon, VA 24210, in Mr. Booher’s name. Those wishing to express sympathy online may do so by visiting www.farrisfuneralservice.com and signing the online guest register.

To order memorial trees or send flowers to the family in memory of Jack Milton Booher, please visit our flower store.