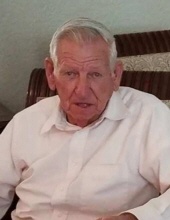 Jackie Dean “Jack” Buckles, age 84, of Bristol, Va., passed away on Friday, June 12, 2020, at his home.  He was a veteran of the United States Army and was a member of the Veterans of Foreign Wars Post 1994 in Abingdon.  He was a longtime employee of Jewell Coal and Coke and later worked in maintenance at Virginia Intermont College.  Jack enjoyed his time as an active member of the Iron Mountain Tractor Club.

He was preceded in death by his parents, Coy Buckles and Ruby Dye Buckles; and his wife of 58 years, Ival “Christine” Coleman Buckles.

Those wishing to share memories, express sympathy or order “Hugs from Home” online may do so by visiting www.farrisfuneralservice.com.  The family of Jackie Dean “Jack” Buckles is being cared for by Farris Funeral Service and Crematory, 427 E. Main St., Abingdon, VA 24210 (276-623-2700).
To order memorial trees or send flowers to the family in memory of Jackie Dean "Jack" Buckles, please visit our flower store.