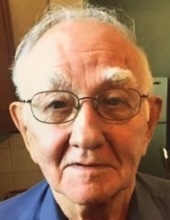 He was a former employee of Brisement Bristol Metals for over 35 years until he retired in June of 1995.  James was a member of East Bristol Baptist Church where he had several close friends.  He loved recording old country music and loved old western movies.  John Wayne was his main man.  Jim also loved collecting records and recording music to distribute to his wonderful friends and neighbors.

Those wishing to express sympathy online may do so by visiting www.farrisfuneralservice.com and signing the online guest register.  The family of James B. Bailey is being cared for by Farris Funeral Service & Crematory, 427 East Main Street, Abingdon, VA 24210, (276) 623-2700.
To order memorial trees or send flowers to the family in memory of James Burl Bailey, please visit our flower store.