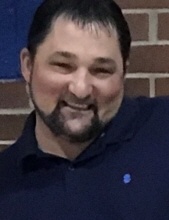 Glade Spring, Va. – James Chadwick (Chad) Adkins, age 41, went to be with the Lord on Wednesday, June 9, 2021. He was born in Smyth County, Virginia and was a lifelong resident of Washington County, Virginia, where he attended Patrick Henry High School.

Chad worked as a plumber for a time, but the career he liked best was landscaping, as he loved the outdoors. He also liked to hunt and fish, and he was an avid fan of Patrick Henry High School sports. Chad’s greatest love was his family.

He was preceded in death by son, Cody Adkins; and his maternal grandparents, Stuart (Bus) and Betty Boyd Cullop.

A memorial service will be held at 5:00 PM on Tuesday, June 15, 2021 at Byars-Cobbs United Methodist Church in Glade Spring, Virginia, with Rev. Donnie Bailey officiating.

In lieu of flowers, the family is requesting financial support to assist with Chad’s funeral expenses.