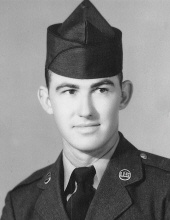 James Noah Phillips, age 86, of Abingdon, VA passed away on Sunday, May 15, 2022 at Johnston Memorial Hospital in Abingdon, VA.

James was born in Bristol, VA on February 2, 1936 to the late James W. and Sadie Elizabeth Jackson Phillips

His military career in the U.S. Airforce spanned 20 Years and one month. He retired in Germany as a Master Seargent. During his time in the Airforce, he traveled abroad serving in Japan, Germany, Central America, and South America. He served in several states at different bases as an aviation technician, Tech flight engineer, and co-pilot with Bell Helicoptors. After his military career, he then was employed with Bell Helicopter in Forth Worth, TX. Upon retirement he enjoyed, playing golf and training beagle dogs with the Tennessee Virginia Beagle Club.

He was preceded in death by a brother, Charles Edward Phillips and a sister Stila Mae Anders.

A Graveside Service will be held at 11:00 AM on Friday May 20, 2022 at the Forest Hills Memory Gardens Cemetery. Military honors will be provided by the Highlands Veteran Honor Guard and the United States Air Force.