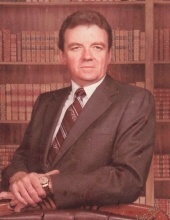 James Richard Barnette, age 86, of Abingdon, Va., went to be with the Lord on Sunday, February 13, 2022, at English Meadows Abingdon Campus. He was born November 15, 1935, in Richlands, Va., a son of the late Richard Kermit Barnette and Mary Alma Taylor Barnette. Richard was also a beloved member of the First Christian Church of Abingdon.

He was honorably discharged from the United States Air Force in 1963. Following his retirement from AEP after 37 years of service, he went to work for Pioneer Chevrolet as the rollback driver and head of the clean-up department.

In addition to his parents, Richard was also preceded in death by his son, Ricky Barnette. He is survived by his loving wife of 63 years, Judith “Judy” Barnette; sister-in-law, Phyllis Boden-Mueler and husband, Will; two nieces, Vicky Bragg and Cindy Parke; grandson, Kenny Pope and wife, Heather, and their son, Noah; special friends he considered family, Ken and Cheryl Pope; Kevin and Beth Pope and their daughter, Meg; Steve and Lisa Pope and their children, Paeyton and Paizlee Pope; and additional special friend, Minister Tom Crise.

A funeral ceremony will be held on Thursday, February 17, 2022, at 11:00 a.m. at the Main Street Chapel of Farris Funeral Service with Minister Tom Crise officiating. A committal service will follow in Greenhills Memory Gardens in Cedar Bluff, Va., where military honors will be provided by the United States Air Force and the Kasey-Shortt VFW Post 9640. Pallbearers will be Kenneth S. Pope, Kenneth K. Pope, Kenneth L. Pope, Steven A. Pope, Tom Crise, and Derek Nunley. Noah A. Pope will serve as an honorary pallbearer. Visitation will be held on Wednesday, February 16, 2022, from 5:00 p.m.-7:00 p.m. at the funeral home.

Those wishing to express sympathy online may do so by visiting www.farrisfuneralservice.com and signing the online guestbook. The family of James Richard Barnette is being cared for by Farris Funeral Service, 427 E. Main St., Abingdon, Va. 24210 (276-623-2700).
To order memorial trees or send flowers to the family in memory of James Richard Barnette, please visit our flower store.