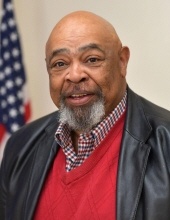 Instead, whoever wants to become great among you must be your servant, and whoever wants to be first must be slave of all. For even the Son of Man did not come to be served, but to serve, and to give his life as a ransom for many.
Mark 10:43-45

James Richard Anderson, III was born on December 8, 1952, to David F. Anderson, Sr. and Naomi Mosley Anderson. He died on Friday, March 25, 2022, due to the complications of cancer, attended by his family. He was one of six children, his parents David F. and Naomi Anderson and his brothers Luther Tyrone and Timothy Michael preceding him in death. As a child he picked up the nickname “Scabbo”, by which he was called most of his life. He was a graduate of Abingdon High School, then attended Virginia State University for one year. After service in the United States Navy, he returned to Washington County and enrolled at Emory and Henry College, graduating in 1982. While both in high school and in college he was a star football and baseball player.
After he finished his formal education, he was a high school teacher, teaching in the schools of Washington County Virginia, Bristol Tennessee, and finishing his career as a teacher at the Job Corps at Jacobs Creek. Before enrolling in college, during college and throughout his entire life he was a volunteer, coaching the youth of Washington County in football, basketball, and baseball. He coached primarily in the Midget Football League in Abingdon. During his coaching career, he coached hundreds of young men. In addition to coaching, he was a fan of Abingdon high school sports and on any Friday evening in the fall, he could be found with his friends standing along a wall overlooking the field. Often, he would travel following the team to their away games. Just as much as he was an Abingdon Falcon fan, he also faithfully attended games at Emory and Henry College and was a lifelong Pittsburgh Steelers fan.
His service to the community and his church, Charles Wesley United Methodist, as Lay Leader, continued throughout his adult life, culminating in his election, as the first African American member to the Town Council of the Town of Abingdon. During his abbreviated tenure, he was an outspoken voice for the construction and completion of athletic fields for the children of the community.
He is survived by the love of his life Hilah Coleman; one brother, David Anderson; two sisters, Audrey Anderson Copeland (Bob) and Renee Michelle Anderson (Darren); double first cousin who he considered a sister, Penny Anderson; as well as two nieces and a nephew; eight double first cousins; seven first cousins; an honorary son, Leslie Paco Merris; and a host of very close friends. During his last illness, he was constantly visited by these friends who supported him as his health declined. The Family would like to thank all of Jimmy’s close friends and for their love and support that they gave to him during his final days.

Those wishing to express sympathy online may do so by visiting www.farrisfuneralservice.com and signing the online guest register. The family of James Richard Anderson, III “Scabbo” is being cared for by Farris Funeral Service and Crematory, 427 East Main Street, Abingdon, VA 24210, (276) 623-2700.

To order memorial trees or send flowers to the family in memory of James Richard "Scabbo" Anderson, III, please visit our flower store.