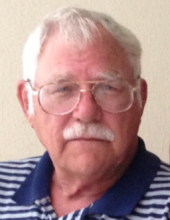 James Roger "Cush" Addair, age 77, of Meadowview, Va., passed away on Thursday, June 10, 2021, at Johnston Memorial Hospital.  He was born May 12, 1944, in Lex, W.Va. to the late Noah McKinley Addair and Bessie Ruth Hughes Addair.  He enlisted in the United States Army at the age of 17 and served three years.  Roger subsequently enlisted in the United States Air Force where he served two tours of duty in Vietnam.  He retired from the Air Force after 21 years of service.

In addition to his parents, Roger was also preceded in death by three siblings, Mary Phillips, Jack Addair, and Danny Addair.

A graveside service will be held on Tuesday, June 15, 2021, at 2:00 p.m. at Forest Hills Memory Gardens with military honors provided by the United States Air Force.

Those wishing to express sympathy online may do so by visiting www.farrisfuneralservice.com and signing the online guestbook.  The family of James Roger "Cush" Addair is being cared for by Farris Funeral Service and Crematory, 427 E. Main St., Abingdon, Va. 24210 (276-623-2700).
To order memorial trees or send flowers to the family in memory of James Roger Addair, please visit our flower store.