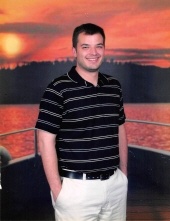 Jason Corvin, age 37, passed away on Wednesday, August 12, 2020 at Bristol Regional Hospital. He was a native of Washington County, Va. and was an accomplished man in his short life. Jason was a graduate of Patrick Henry High and was a member of the Rebel Regiment Band. He played saxophone and became the Drum Major in his senior year. He went on to study at Emory & Henry College where he earned degrees in Business and Economics. He later earned his Master’s in Accounting from Liberty University.

After college, Jason taught Accounting at Virginia Highlands Community College (VHCC) and at King University. While at VHCC, he founded and managed the Wolf Hills Coffee Shop. Jason had his own accounting and tax preparation business; Corvin and Company. With his giving heart, he recruited students to accompany him to the Bristol, Va. Library, where they would prepare taxes for individuals who could not afford these services elsewhere. He received numerous awards and recognitions for his volunteer work.

Jason had a fun loving and lighter side. He was a true University of Tennessee, Big Orange Fan. He enjoyed countless card games and playing dominoes with family and friends. Jason took great pride in his home, and especially with his flowers. During his illness, he hoped that working with his flowers would give him something to do. Jason was a member of Greenfield Baptist Church.

He was predeceased at age 7 by his father, Ricky Corvin.

Becky Corvin of Abingdon is his only surviving grandparent. Those two had a special bond after the death of Jason’s father. They could laugh, cry, fuss and makeup. Jason was her pride and joy and she always thought that he “looked like a million bucks.”

The family will receive friends on Saturday, August 15, 2020 from 6:00 PM – 8:00 PM at the Main Street Chapel of Farris Funeral Service. A funeral ceremony will be held at 2:00 PM on Sunday, August 16, 2020 at the funeral home with Bro. Dan Birchfield officiating. Interment will follow in Knollkreg Memorial Park where Justin Bryant, Ty Bryant, Jonathan McGlocklin, Jeremy McGlocklin, Brandon Miller and Matt McKinnen will serve as casket bearers.

The family offers heart-felt thanks to Dr. Paul Armstrong, Jason’s doctor and friend, the staff at Johnston Memorial Hospital, Duke University Hospital and Bristol Regional Medical Center for the love and kindness shown to Jason during his illness.

The family of Jason Corvin is being cared for by Farris Funeral Service and Crematory, 427 E. Main St. Abingdon, VA 24210 (276-623-2700)
To order memorial trees or send flowers to the family in memory of Jason Lee Corvin, please visit our flower store.