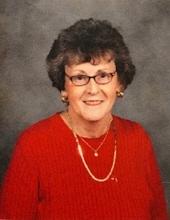 Jean Wheatley LaVoie Johnson, formerly of York Road, Roanoke, Va. rose to glory on September 27, 2020 at Johnston Memorial Hospital in Abingdon, Va. Jean was a resident at English Meadows Assisted Living for the past 4 years.

Jean was born in Cincinnati, Ohio on May 26, 1933 to John William and Addy Greaves Wheatley. As a child, her family lived in a variety of northern towns when her parents received new appointments with the Salvation Army.

She graduated from Franklin Academy in Malone, N.Y., married Arthur LaVoie, became a mother and moved her family to Roanoke, Virginia when Art was transferred with GE to the new Salem plant in the late 50s.

Jean was a longtime member of Fairview United Methodist Church and sang in the choir for over 60 years. Jean was a member and president of the Roanoke Valley Junior Women’s Club in the 60s. She served on many PTA boards and made sure her children got to Scouts, music lessons, sports and band practices and other school activities. Jean worked at Leggett’s and retired from GE. She lived in Roanoke until 2016 when she moved to English Meadows Assisted Living in Abingdon.

Surviving are daughter Diane LaVoie Carmack and husband Bill of Abingdon, Va., son Glenn A. LaVoie of Buchanan, Va., granddaughters Anne E. C. Nichols and husband David of Henrietta, N.Y. and Emily C. C. Britt of Lynchburg, Va. and tiny dog Spark. Her nieces Barbara Werkley and Yvonne Swidergal also survive. Anne and Emily were the joys of her heart and she was so very proud of them and their accomplishments.

Farris Funeral Service and Crematory, Abingdon, Va is serving Jean’s family. At her request no public service will be held. The family will honor her memory when all can gather safely.

Many thanks go to the staff of English Meadows for their love, care and patience for Jean and Peyton. The medical staff at Johnston Memorial Hospital and Ballad Hospice are commended for their professionalism and dedication to patient care under the current circumstances. We thank you.
To order memorial trees or send flowers to the family in memory of Jean Marie Wheatley Johnson, please visit our flower store.