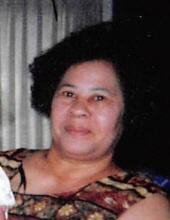 Jeanie was a member of Charles Wesley United Methodist Church and had a great love for Gospel music. She also enjoyed television soap operas, judge shows, Westerns, and Law & Order.  She confessed her faith in God at an early age.

She will always be remembered as a loving, caring mother, a compassionate caregiver, and a generous giver. Everyone Jeanie met was touched by her. She received awards of appreciation for the excellent childcare she provided, including special recognition from Former President Bush.

In addition to her father, she was preceded in death by a sister, Mary Reed Lowery; a brother, John Henry Reed, Sr.; and two nephews, John H. Reed, Jr., and Ronald T. Reed.

The family would also like to give a special thanks to the Johnston Memorial Hospital ER Staff, Doctors and Nurses; and the Washington County Lifesaving Crew.

In observance of Covid-19 restrictions, face masks will be required and social distancing will be practiced.

Those wishing to express sympathy or send “Hugs from Home” may do so by visiting www.farrisfuneralservice.com. The family of Jeanie Reed Sheffey is being cared for by Farris Funeral Service and Crematory, 427 E. Main St., Abingdon, Va. 24210 (276-623-2700).
To order memorial trees or send flowers to the family in memory of Jeanie Reed Sheffey, please visit our flower store.