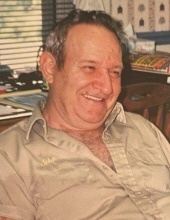 John M. Borders, Jr., age 91, of Abingdon, Va., passed away on Sunday, January 24, 2021, at his home. He was born October 22, 1929, to the late John M. Borders, Sr. and Lou Verna Browning Borders in Logan, W. Va.  John was a veteran of the United States Air Force and retired as a Division Manager from Pittston Coal Company.  He was a member of the Sandy Valley Masonic Lodge No. 17 in Grundy, Va. and Barrett Lodge No. 76 in Clintwood, Va.

A private committal service will be held at Knollkreg Memorial Park.

Those wishing to express sympathy online may do so by visiting www.farrisfuneralservice.com and signing the online guestbook.  The family of John M. Borders, Jr. is being cared for by Farris Funeral Service and Crematory, 427 E. Main St., Abingdon, Va. 24210 (276-623-2700).
To order memorial trees or send flowers to the family in memory of John M. Borders, Jr., please visit our flower store.