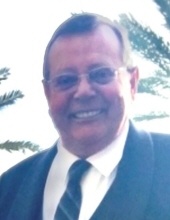 Abingdon, VA - John Scott Bundy, 78, of Abingdon, VA passed away on September 10, 2021.  John was born in Abingdon to Muriel Scott Bundy and Jack Graham Bundy on April 7, 1943. He attended Abingdon High School and received his undergraduate degree from Emory and Henry College, his favorite school.

After receiving his Law Degree from the University of Tennessee, he passed the state bar and enlisted in the U.S. Army where he served in Vietnam.   After completing his service, he returned to Abingdon joining the law practice of Jack White and Jim Elliott and continued to practice law in the community for the next 40+ years.

Dancing, golfing and cracking jokes were his passions…he loved having everyone on the dance floor, and if he got your attention for just a minute, he made sure to share a joke or two. Anyone who knew John was touched by his kindness.  He was the greatest friend to so many and cared greatly about his community. Abingdon was his beloved home and he spoke about it proudly to all who would listen.

John is survived by daughters Alyson (Rim) Dillow, Sarah Bundy, Rachel (Trent) Bales; grandchildren Muriel Dillow, Judge Dillow, Scottlyn Bales, Barrett Bales. Special family members include his former wife Connie Bundy and nephews Randy Copeland, Scott Hetzer, John Hetzer.     John’s friendships are his legacy and are too many to name.  The family appreciates all of you and John loved you dearly.  He will be forever loved, forever missed and forever in our hearts.

Celebration of life and receiving a friends will be held at Glenrochie Country Club on Wednesday, September 15, 2021, from 6:00 PM – 9:00 PM.  Come join the family and celebrate a life well lived.  Graveside services are open to all and will be held on Thursday, September 16, 2021, at 11:00 AM, in Knollkreg Memorial Park with Rev. Luther Roberts officiating.  Military rites will be conducted by Highlands Veterans Honor Guard and the Virginia National Guard.

Those wishing to share memories or messages of sympathy may do so online by visiting www.farrisfuneralservice.com.  The family of John Scott Bundy is in the care of the Main Street Chapel of Farris Funeral Service, 427 East Main Street, Abingdon, VA 24210 (276-623-2700).
To order memorial trees or send flowers to the family in memory of John Scott Bundy, please visit our flower store.