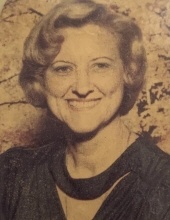 A memorial service will be held on Tuesday, May 11, 2021, at 2:00 p.m. at the Forest Hills Chapel of Farris Funeral Service, 19415 Lee Hwy., Abingdon, Va. 24210, with Pastor Gary Harless officiating. Inurnment will follow in Forest Hills Memory Gardens.
To order memorial trees or send flowers to the family in memory of Juanita Robinette, please visit our flower store.