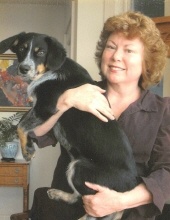 Kathleen Louise Parks, 66, died Monday, January 4, 2021, at her home in Abingdon. Daughter of the late David Walker and Josephine McCarthy, she was born in Sterling, Va. into a large family. She was a graduate of James Madison University, and her first job was with the Farm Bureau. Kate then transitioned to a career in telecommunications, working for Satellite Business Systems (SBS), a subdivision of IBM. Her career was spent working in the areas of marketing, engineering and management.

Kate met her future husband Jim on Valentine’s Day at Clyde’s, a well-known restaurant in the metropolitan Washington, D.C. area. They were married in a country wedding ceremony at her family home and embarked on a beautiful life together. Working for the same company, they eventually relocated to Dallas. After the company was sold, Jim and Kate bought a hippie van and traveled for four months throughout the Western United States. After that, the couple moved back to Northern Virginia, and Kate eventually became a full-time caregiver for Jim’s mother until his mother’s death.

The couple moved to the Abingdon area 22 years ago, and they are active with the Unitarian Universalist Church in Meadowview, Va. Seven years ago, Kate began her fight with cancer, and she and Jim credited her oncologist Dr. Forrest Swan for helping her live much longer than originally expected.

One special part of Kate’s life was music: she was an accomplished musician, playing old-time fiddle, and a singer who had performed at Carnegie Hall along with other choir members of the Highlands Community College. Kate was a beautiful person who loved life, animals, and people. Together, she and Jim enjoyed traveling, playing music, and focusing on their pets and their farm.

In addition to her parents, Kate was preceded in death by her sister Carol Randett. She is survived by her loving husband Jim Parks, and by her siblings Linda McCarthy, David McCarthy, Jr., William McCarthy, Patricia Blake, and Teresa Johnson.

A gathering to celebrate the life that Kate lived will be held at a later date. Memorial contributions in her name may be made to Happy Tails Animal Rescue, Post Office Box 95, Abingdon, VA 24212.

Those wishing to share memories, express sympathy, and send “Hugs from Home” may do so by visiting www.farrisfuneralservice.com. Kate Parks and her family are in the care of the Main Street Chapel of Farris Funeral Service, 427 East Main Street, Abingdon, VA 24210 (276-623-2700).
To order memorial trees or send flowers to the family in memory of Kathleen Louise Parks, please visit our flower store.