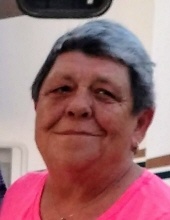 Kathy Faye Gobble Singleton, age 69, went to be with the Lord on Saturday, August 31, 2019, in Johnston Memorial Hospital.  Kathy was a Burger King employee for 31 years and attended Mt. Calvary Church.

She is preceded in death by her parents, Luther Clarence and Thelma Horne Gobble and brother, Robert Eugene “Red” Gobble.

Those wishing to express sympathy online may do so by visiting www.farrisfuneralservice.com and signing the online guest register. The family of Kathy Faye Gobble Singleton is being cared for by Farris Funeral Service & Crematory, 427 East Main Street, Abingdon, VA 24210, (276) 623-2700.
To order memorial trees or send flowers to the family in memory of Kathy Faye Gobble Singleton, please visit our flower store.