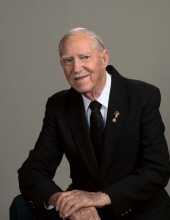 Bristol, VA – Kermit Smith Johnson, age 88, passed on Thursday, March 17, 2022. Kermit was a 1953 Graduate of Meadowview High School and served in the U.S. Air Force during the Korean War Era. He was employed with Raytheon Corporation for over 35 years and a member of Fellowship Chapel for over 40 years. Kermit was a member of Shelby Masonic Lodge #162 and an avid Virginia Tech fan.

In lieu of flowers, memorial contributions may be made to Fellowship Chapel, 201 Crockett Street, Bristol, VA 24201, or to the Gideons International, https://gideons.org/donate, in Mr. Johnson’s name. Those wishing to express sympathy online may do so by visiting www.farrisfuneralservice.com and signing the online guest register.

To order memorial trees or send flowers to the family in memory of Kermit Smith Johnson, please visit our flower store.