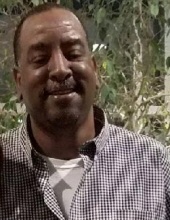 Marshall was born March 8, 1964, in Abingdon, Va. and was a graduate of Abingdon High School. Shortly after graduating high school, he began working at Eastman Chemical Company in Kingsport, Tenn. Marshall worked there up until his death, for a total of 34 years.

Those who knew Marshall knew that he loved the Dallas Cowboys and the Virginia Tech Hokies and was fortunate enough to go see both of his favorite teams play on different occasions. He was also an avid deer hunter for many years and a fan of Bruno Mars.

Marshall’s true love and passion was his devotion to his family: his loving wife of 32 years, Penny; Cody and Briana (also know as Precious), his son and daughter who were incomparably the center of his life, and then came Aaliyah, his granddaughter, who stole his heart forever. He was affectionately known as Poppy to her.

Marshall was baptized in the name of Jesus on November 26, 1978 and shortly thereafter received the gift of the Holy Ghost. He was a member of Greater Kings Chapel Church in Abingdon, Va.

In addition to his wife, children and granddaughter, Marshall is also survived by his sisters, Helen Fuqua of Kingsport, Tenn., Cynthia Clark (Melvin) of Abingdon; a brother, Billy Fullen, Jr. (Serena) of Bristol, Va.; his step-father Billy Fullen, Sr. of Abingdon; and his mother-in-law Nell Pickel of Lexington, S.C.; sisters-in-law Carolyn Carswell, Terri Pickel and Pamela Ritchie, and brother-in-law Larry Ralph Pickel. Marshall had numerous nieces and nephews and two special nephews, Noah Clark who attends Virginia Tech and with whom Marshall was looking forward to attending a Virginia Tech football game, and Shannon Pickel. Marshall is also survived by his maternal aunt Mary Ann Fuqua Bowers and paternal uncle Joe L. Fuqua, as well as a number of cousins and friends.

The family of Marshall Fuqua will receive friends from 6:00 p.m. – 8:00 p.m. Sunday, October 27, 2019, at the Main Street Chapel of Farris Funeral Service. A service celebrating the life of Marshall will be held at 2:00 p.m. Monday, October 28, 2019 in the Main Street Chapel. Officiating will be Elder Mark Redd, along with Elder Lester Turner and Minister Carol Brown who will deliver the eulogy. Burial will follow in Forest Hills Memory Gardens where pallbearers will be Ronnie Norris, R. W. Osborne, Jeff Fullen, James Fullen, Cody Johnson, Jackie Humphrey, and Wes Combs. Honorary pallbearers will be Marshall’s nephews.

Those wishing to share memories and express sympathy online may do so by visiting www.farrisfuneralservice.com. Marshall Fuqua and his family are in the care of Farris Funeral Service and Crematory, 427 East Main Street, Abingdon, VA  24210 (276-623-2700).
To order memorial trees or send flowers to the family in memory of Marshall Roy Fuqua, please visit our flower store.