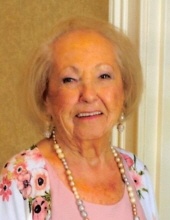 Martha was born on May 22, 1924, in Harlan County, Ky. and later moved to Grundy, Va. where she spent most of her life before moving to Abingdon in 1991. She was a retired business woman and homemaker. After working as a salesperson for Dixon Jewelers and serving as the director of the Neighborhood Youth Corps (a government funded educational program) in Buchanan County, she began her own business opening The Sewing Mart in Grundy. In 1967, her husband founded Bob Gibson Powder Company and she took a vital role in the business serving as the company's Vice President. The company grew into two other explosive companies, Gibson Explosives in Duffield, Va. and Lily Explosives in Beckley, W.Va. She also took an active role in her children's many activities. She and her husband were athletic boosters and supporters. Martha was active with the Grundy High School cheerleaders and was a Brownie and Girl Scout troop leader. She was a member of Grundy Baptist Church where she was active in many youth activities and after moving to Abingdon attended Highlands Fellowship. Her ministry in life was preparing meals for those she loved and those in need. She enthusiastically opened her home for several years to host a ladies' Bible Study. She was a terrific homemaker always welcoming her family and friends. She was active in the Eastern Star Order 133 and several other ladies' organizations and enjoyed the game of golf with her husband, family and girlfriends. She will be remembered as a blessing to her family and friends.

A celebration of the long and beautiful life of Martha Frazier Gibson will be conducted on Sunday, October 17, 2021, at 4:30 p.m. at Highlands Fellowship, 22417 Watauga Rd., Abingdon, Va.

In lieu of flowers, the family requests memorial contributions be made to St. Jude Children's Research Hospital, 501 St. Jude Pl., Memphis, Tenn. 38105, or the charity of your choice.
To order memorial trees or send flowers to the family in memory of Martha Frazier Gibson, please visit our flower store.