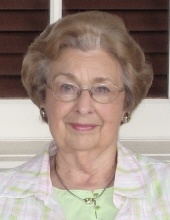 Mary Belle Petty, age 92, passed away peacefully on May 21, 2020 at Bristol Regional Medical Center, Bristol, Tennessee.  She was born in Greensboro, North Carolina, an only child to James and Mary Agnes Teague.

She studied speech and drama, a graduate of Women’s College of North Carolina, now known as UNCG and attended a summer semester at UNC Chapel Hill with Studies in Drama.  During that semester, Mary Belle was honored to be asked by Paul Green, and American playwright, to return to audition as Queen Elizabeth for his historical symphonic drama, The Lost Colony. Mary Belle declined the invitation, returning to Greensboro, soon to meet her lifetime love, Franklin Benjamin “Jack “Petty. They were both active members in Centenary United Methodist Church, Greensboro, NC.

Mary Belle continued to pursue her love of theatre, with leading roles in several plays in N.C., and teaching college level drama and high school drama in Va.  She spent her career as an educator, transitioning from Drama to earning her Master’s Degree from East Tennessee State University in Reading and Special Education.  She then went on to team with Ms. Evelyn Murray to start the Right to Read program in the Bristol, Va. school system, and later the Bristol Education and Enrichment Program.  Mary Belle retired after serving more than 25 years in the Va. school system.

Mary Belle would always say “look for the good” and touched so many of her students’ lives who would see her in later years and recall how much they had learned from her and the program. She loved her family, teaching, and her friendships.  She enjoyed traveling, bridge, reading and socializing with her friends.  She was active in the YWCA Women’s Club where she served as President among other offices.

Mary Belle was member of State Street United Methodist Church and a resident of Oakmont at Gordon Park since 2016, where she made many close friends.

She was preceded in death by her beloved husband Franklin Benjamin “Jack” Petty.  She is survived by her daughter Mary Amelia “Amy” Bennett, and husband John, and her son Bradford Jay Petty and loving friend Mary Kay Dishner. Funeral services will be held at 11:00 a.m. Monday, May 25, 2020, in the Main Street Chapel of Farris Funeral Service with Rev. Jonathan Jonas officiating. Visitation with the family will be held from 10:15 a.m. until service time Monday.  Entombment will be held in the Colonial Chapel Mausoleum of Forest Hills Memory Gardens. Memorials may be made to State Street United Methodist Church, 300 W. Valley Drive, Bristol, VA 24201 or to the OAFA, Alzheimer’s Foundation of America (866-232-8484), 322 Eighth Ave., 16th Floor, New York, NY 10001.

The video recording of the service may be viewed by going to the Tribute Wall for Mrs. Petty's obituary.

Those wishing to share memories, express sympathy, and send “Hugs from Home” may do so by visiting www.farrisfuneralservice.com. The family of Mary Belle Petty is being cared for by Farris Funeral Service & Crematory, 427 East Main Street, Abingdon, VA 24210, (276) 623-2700.
To order memorial trees or send flowers to the family in memory of Mary Belle Petty, please visit our flower store.