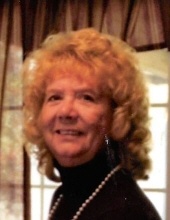 God put his arms around her and whispered, “time to come home”, a golden heart stopped beating, hardworking hands at rest. Marylou “Madge” Cowan, of Abingdon, Va., born on August 17, 1945, received her angel wings to fly into the arms of God on Friday, January 24, 2020.  She was a member of Midway Church of the Living God.

She is now rejoicing in Heaven with her beloved son, Jackie Lee, and her parents, Roy and May Bell Estep; three brothers, Bobby, Charles, and Edd Estep; three sisters, Juanita Estep, Ruby Lester, and Audrey Griffey.

Madge is survived by her husband, the love of her life of 52 years, James D. Cowan; two grandsons, Joshua (Angela) Cowan, of Colorado Springs, Colo. and Matthew Cowan, of the home; and a special little boy who she called “grandson” and he called her “momaw”, Peyton Fritz; daughter-in-law, Cindy Cowan of Abingdon; two brothers, Donald (Ruth) Estep, of Hurley, Va. and Jackie (Brenda) Estep, of Abingdon, Va.; three sisters: Joan Matney of Lebanon, Va.; Pauline Chamberlain and Lucille (David) Phillips, all of Abingdon; and many special nieces and nephews.

A funeral ceremony will be held on Tuesday, January 28, 2020, at 7:00 p.m. at the Main Street Chapel of Farris Funeral Service with Pastor David Gibson officiating.  A committal service will be held on Wednesday, January 29, 2020, at 2:00 p.m. at Knollkreg Memorial Park where Chris Estep, Dereck Estep, Todd Estep, Austin Faris, Glen Faris, and Robbie Fritz will serve as pallbearers.  Those wishing to attend the committal service are asked to convene at the funeral home on Wednesday by 1:30 p.m. to travel in procession to the cemetery.  Visitation will be held on Tuesday from 5:00 p.m.-7:00 p.m. at the funeral home prior to the service.

Those wishing to express sympathy online may do so by visiting www.farrisfuneralservice.com and signing the online guestbook.  The family of Marylou “Madge” Cowan is being cared for by Farris Funeral Service and Crematory, 427 E. Main St., Abingdon, VA 24210 (276-623-2700).
To order memorial trees or send flowers to the family in memory of Marylou "Madge" Cowan, please visit our flower store.