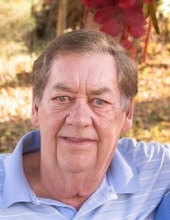 Abingdon, VA - Michael Paul Chaney, 79 years of age, passed away peacefully at his home Saturday August 27, 2022. Paul was born on April 1, 1943, in Buchanan County, VA. He was a loving husband, father, and grandfather. Paul grew up in Buchanan County and after school worked in the mining industry and later served in the United States Army before returning home and resuming his career in mining.

He was a hard worker and was fortunate to have success in both the mining industry and later in real estate. Paul was a loving father and wanted nothing more than Michael to be happy and helped him with anything he could. He couldn’t stand to watch Michael in the racecar because it made him nervous, but he helped him achieve his dream of racing because he knew how much Michael loved it. He loved riding around his farm in Abingdon and getting to spend time with his grandsons in later years.

For the past several years with the help of his special nephew, David Matney, he planted a garden for his grandsons with their favorites, cucumbers, watermelons, strawberries, and cherry tomatoes and looked forward to helping them pick them. He also enjoyed NASCAR and was a big country music fan of George Jones. He had a kind, generous heart but didn’t want any recognition for anything he did.

Those wishing to express sympathy online may do so by visiting www.farrisfuneralservice.com and signing the online guest register. The family of Michael Paul Chaney is being cared for by Farris Funeral Service & Crematory, 427 East Main Street, Abingdon, VA 24210, (276) 623-2700.

To order memorial trees or send flowers to the family in memory of Michael Paul Chaney, please visit our flower store.