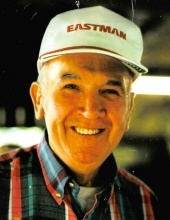 Paul Roosevelt Jackson went home to be with the Lord on Saturday, May 16, 2020 at Commonwealth Senior Living in Abingdon at the age of 87. He was born on April 10, 1933 in Saltville, Va. He was the last living child of the late Bryant L. Jackson and Pocahontas Broady Jackson.

Paul was a veteran of the United States Air Force, and a 28-year employee of Eastman Chemical Company in Kingsport, TN. Prior to Eastman, he worked for the Norfolk & Western Railway in the southern coalfields. Paul attended Greendale Chapel in Abingdon. He loved the people, music, and places of Central Appalachia. He will be fondly remembered for his good-natured sense of humor, his dedication to his family, and the kindness he showed to those around him.

Survivors include his wife of 54 years, Wanda Ann Jackson of Abingdon; two sons, Mark Jackson and wife Amy Renigar of Nashville, Tenn. and Jeff Jackson of Lebanon, Va.; one daughter, Cynthia Petty and husband Brent Petty of Bristol, Va.; and his beloved grandchildren, Megan Blackburn and husband Josh Blackburn, Hannah Petty, Emily Petty, and Tyler Petty and wife Sarah. Paul would have been a great-grandfather this year, as Megan is expecting her first child, a daughter, in October.

The family wishes to express its gratitude to the staff of Commonwealth Senior Living and Caris Hospice for their compassion and care.

The Rev. Jerry Eggers will officiate a family service at the Main Street CHapel of Farris Funeral Service at 11:00 a.m. on Wednesday, May 20, 2020. The family and funeral home will observe COVID-19 capacity and social distancing restrictions. Paul will be laid to rest at Knollkreg Memorial Park. The video of Mr. Jackson's service may be viewed by visiting his obituary page Tribute Wall.

Those wishing to share memories, express sympathy, and send “Hugs from Home” may do so by visiting www.farrisfuneralservice.com.  The family of Paul Roosevelt Jackson  is being cared for by Farris Funeral Service and Crematory, 427 E. Main St., Abingdon, VA 24210 (276-623-2700).
To order memorial trees or send flowers to the family in memory of Paul Roosevelt Jackson, please visit our flower store.