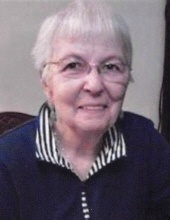 She was born January 30, 1935 in Bristol, VA. to the late Arthur Ray Hagy, Jr. and the late Edith Virginia Booher Hagy. Peggy had retired from Safeway, but she held many administrative jobs including secretary for the C.I.A. and was a long time volunteer at Johnston Memorial Hospital. The proudest times of her life were the births of her children and grandchildren.

The funeral service will be conducted 2:00 p.m. Saturday, February 29, 2020 in the Main Street Chapel of Farris Funeral Service with the Rev. Dr. Bob Neace officiating. Entombment will follow in the Chapel of Memories Mausoleum at Forest Hills Memory Gardens. The family will receive friends one hour prior to the funeral.

Those wishing to express sympathy online may do so by visiting www.farrisfuneralservice.com and signing the online guestbook. The family of Peggy Joanne Hagy Clark Bunch is being cared for by Farris Funeral Service & Crematory, 427 East Main Street, Abingdon, VA 24210, (276-623-2700).
To order memorial trees or send flowers to the family in memory of Peggy Joanne Hagy Clark Bunch, please visit our flower store.