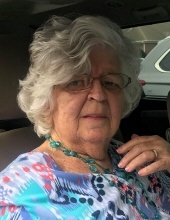 Peggy was born March 26, 1940 to Eula (Wyatt) and Vance Overbay in Richlands, Virginia. She graduated from Warwick High School in Newport News in 1958.  Bowling was a favorite pastime and she won many trophies.  Peggy was a wonderful athlete and loved to compete.

Peggy was a huge fan of NASCAR.  She was arguably Dale Earnhardt, Jr.’s biggest supporter and even got to meet him.  She always had a kind word to share with everyone…except pesky Darrell Waltrip fans; she never had much to say to them.  She also loved the Pittsburgh Steelers and never missed a game.

Peggy married Frank Sawyer on February 14, 1981 in Norfolk, Virginia.  They retired and moved to Woolwine, VA in 1995 where they were active members of the Smith River Church of the Brethren.

Though she “retired” she never stopped working.  She was known as The Bag Lady and made beautiful, custom quilted handbags.  She also enjoyed working as the referral coordinator for Dr. Gary Kuiken in Floyd, Virginia for many years.

Those wishing to express sympathy online may do so by visiting www.farrisfuneralservice.com and signing the online guest register.  The family of Peggy O. Sawyer is being cared for by Farris Funeral Service & Crematory, 427 East Main Street, Abingdon, VA 24210, (276) 623-2700.
To order memorial trees or send flowers to the family in memory of Peggy Overbay Sawyer, please visit our flower store.